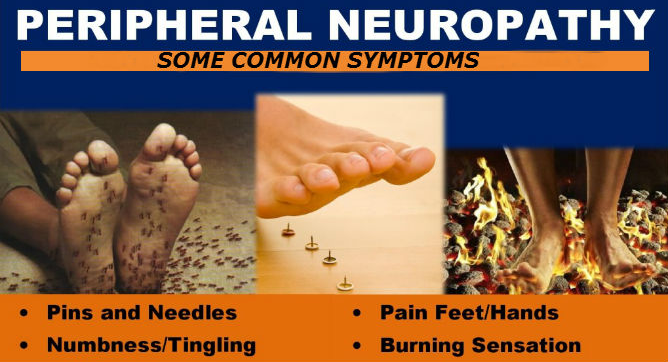 What Is Peripheral Neuropathy?

The name of the condition tells you a bit about what it is:

Peripheral: Beyond (in this case, beyond the brain and the spinal cord.)
Neuro-: Related to the nerves
-pathy: Disease

Peripheral neuropathy refers to the conditions that result when nerves that carry messages to and from the brain and spinal cord from and to the rest of the body are damaged or diseased.

The peripheral nerves make up an intricate network that connects the brain and spinal cord to the muscles, skin, and internal organs. Peripheral nerves come out of the spinal cord and are arranged along lines in the body called dermatomes. Typically, damage to a nerve will affect one or more dermatomes, which can be tracked to specific areas of the body. Damage to these nerves interrupts communication between the brain and other parts of the body and can impair muscle movement, prevent normal sensation in the arms and legs, and cause pain.

There are several different kinds of peripheral neuropathies that stem from a variety of causes. They range from carpal tunnel syndrome (a traumatic injury common after chronic repetitive use of the hands and wrists, such as with computer use) to nerve damage linked to diabetes.

As a group, peripheral neuropathies are common, especially among people over the age of 55. All together, the conditions affect 3% to 4% of people in this group.

Neuropathies are typically classified according to the problems they cause or what is at the root of the damage. There also are terms that express how extensively the nerves have been damaged.
Mononeuropathy

Damage to a single peripheral nerve is called mononeuropathy. Physical injury or trauma such as from an accident is the most common cause. Prolonged pressure on a nerve, caused by extended periods of being sedentary (such as sitting in a wheelchair or lying in bed), or continuous, repetitive motions, can trigger a mononeuropathy.

Carpal tunnel syndrome is a common type of mononeuropathy. It is called an overuse strain injury, which occurs when the nerve that travels through the wrist is compressed. People whose work requires repeated motions with the wrist (such as assembly-line workers, physical laborers, and those who use computer keyboards for prolonged periods) are at greater risk.
Mononeuropathy

The damage to the nerve can result in numbness, tingling, unusual sensations, and pain in the first three fingers on the thumb side of the hand. The person may awaken at night with numbness in their hand or discover that when they perform activities like using a hair dryer, the numbness is more noticeable. In time, carpal tunnel injuries can weaken the muscles in the hand. You may also feel pain, tingling, or burning in your arm and shoulder.

Here are examples of other mononeuropathies that can cause weakness in the affected parts of the body, such as hands and feet:

Ulnar nerve palsy occurs when the nerve that passes close to the surface of the skin at the elbow is damaged. The numbness is noted in the 4th and 5th digit of the hand.
Radial nerve palsy is caused by injury to the nerve that runs along the underside of the upper arm and can occur with fractures of the humerus bone in the upper part of the arm.
Peroneal nerve palsy results when the nerve at the top of the calf on the outside of the knee is compressed. This leads to a condition called “foot drop,” in which it becomes difficult to lift the foot.

Neuropathy can affect nerves that control muscle movement (motor nerves) and those that detect sensations such as coldness or pain (sensory nerves). In some cases, it can affect internal organs, such as the heart, blood vessels, bladder, or intestines. Neuropathy that affects internal organs is called an autonomic neuropathy. This rare condition can cause low blood pressure or problems with sweating.

Polyneuropathy accounts for the greatest number of peripheral neuropathy cases. It occurs when multiple peripheral nerves throughout the body malfunction at the same time. Polyneuropathy can have a wide variety of causes, including exposure to certain toxins such as with alcohol abuse, poor nutrition (particularly vitamin B deficiency), and complications from diseases such as cancer or kidney failure.

One of the most common forms of chronic polyneuropathy is diabetic neuropathy, a condition that occurs in people with diabetes. It is more severe in people with poorly controlled blood sugar levels. Though less common, diabetes can also cause a mononeuropathy.
Polyneuropathy continued…

The most common symptoms of polyneuropathy are:

Because people with chronic polyneuropathy often lose their ability to sense temperature and pain, they can burn themselves and develop open sores as the result of injury or prolonged pressure. If the nerves serving the organs are involved, diarrhea or constipation may result, as well as loss of bowel or bladder control. Sexual dysfunction and abnormally low blood pressure also can occur.

One of the most serious polyneuropathies is Guillain-Barre syndrome, a rare disease that strikes suddenly when the body’s immune system attacks nerves in the body just as they leave the spinal cord. Symptoms tend to appear quickly and worsen rapidly, sometimes leading to paralysis. Early symptoms include weakness and tingling that eventually may spread upward into the arms. Blood pressure problems, heart rhythm problems, and breathing difficulty may occur in the more severe cases. However, despite the severity of the disease, recovery rates are good when patients receive treatment early.

There are many factors that can cause peripheral neuropathies, so it is often difficult to pinpoint the origin. Neuropathies occur by one of three methods:

Acquired neuropathies are caused by environmental factors such as toxins, trauma, illness, or infection. Known causes of acquired neuropathies include:
Diabetes
Several rare inherited diseases
Alcoholism
Poor nutrition or vitamin deficiency
Certain kinds of cancer and chemotherapy used to treat them
Conditions where nerves are mistakenly attacked by the body’s own immune system or damaged by an overaggressive response to injury
Certain medications
Kidney or thyroid disease
Infections such as Lyme disease, shingles, or AIDS
Hereditary neuropathies are not as common. Hereditary neuropathies are diseases of the peripheral nerves that are genetically passed from parent to child. The most common of these is Charcot-Marie-Tooth disease type 1. It is characterized by weakness in the legs and, to a lesser degree, the arms — symptoms that usually appear between mid-childhood and age 30. This disease is caused by degeneration of the insulation that normally surrounds the nerves and helps them conduct the electrical impulses needed for them to trigger muscle movement.
Idiopathic neuropathies are from an unknown cause. As many as one-third of all neuropathies are classified in this way.

BACKGROUND: Spinal cord stimulation (SCS) has been used for the relief of chronic, intractable pain for over 2 decades. Recent technologic improvements in hardware have resulted in improved clinical outcome. We report our experience with epidural spinal cord stimulation for pain control of peripheral neuropathy for the past 15 years. METHODS: An analysis of our series of 276 patients revealed 30 patients diagnosed with peripheral neuropathy. The mean age of the 16 men and 14 women in the study was 62.4 years. The anatomic sources of pain included thorax, as well as upper and lower limbs. Causes of intractable pain included postherpetic neuralgia, intercostal neuralgia, causalgic pain, diabetic neuropathy, and idiopathic neuropathy. RESULTS: Nineteen patients reported relief of pain on trial stimulation and had their systems permanently implanted. At an average of 87 months’ follow-up, 14 of these patients achieved long-term success in control of chronic pain (47% of all patients included in this study). Six patients reported excellent pain relief (> 75% pain relief), eight described good results (> 50% pain relief), and six had poor pain relief (< 50% pain relief). CONCLUSION: SCS is an effective therapy for pain syndromes associated with peripheral neuropathy. Causalgic and diabetic neuropathic pain seem to respond relatively well. whereas postherpetic pain and intercostal neuralgia syndromes seem to respond less favorably to the long-term beneficial effects of SCS. This information will be useful in the selection of patients with peripheral neuropathic pain who could be helped by SCS.

BACKGROUND: Conventional treatment for painful peripheral diabetic neuropathy is largely symptomatic and often ineffective, with unacceptable side-effects. We tested electrical spinal-cord stimulation for the management of chronic neuropathic pain. METHODS: Ten diabetic patients who did not respond to conventional treatment (mean age 51 [SD 9.3] years, six with type II diabetes, mean duration of diabetes 12 [6.3] years, mean duration of neuropathy 5 [2.1] years) were studied. The electrode was implanted in the thoracic/lumbar epidural space. Immediate neuropathic pain relief was assessed by visual analogue scale (VAS) after connecting the electrode, in a random order, to a percutaneous electrical stimulator or to a placebo stimulator. Exercise tolerance was assessed on a treadmill. FINDINGS: Eight subjects had statistically significant pain relief with the electrical stimulator (p < 0.02) and were therefore converted to a permanent system. Statistically significant relief of both background and peak neuropathic pain was achieved at 3 months (n = 7, p = 0.016), at 6 months (n = 7, p = 0.03), and at the end of the study (14 months, n = 7, background pain p = 0.06, peak pain p = 0.03). One patient died 2 months after the start of the study of unrelated cause while continuing to benefit from treatment and another patient ceased to benefit at 4 months. McGill pain questionnaire scores with the stimulator turned off did not change significantly from baseline scores, indicating that the severity of the underlying pain was unaltered. However, with the stimulator turned on, there was a statistically significant (p < 0.05) improvement in all four components of the score, by the end of the study. At the end of the study, six patients continued to gain significant pain relief and used the stimulator as the sole treatment for their neuropathic pain. For example, median background and peak pain scores at the end of study, were, respectively, 77 and 81 with the stimulator off and 23 and 20 with the stimulator on. Exercise tolerance significantly improved at 3 months (n = 7, median % increase 85 [IQR, 62-360], p = 0.015) and at 6 months (n = 6, 163 [61-425], p = 0.0007). Electrophysiological tests, vibration perception-threshold, and glycaemic control were unchanged. INTERPRETATION: Electrical spinal-cord stimulation offers a new and effective way of relieving chronic diabetic neuropathic pain and improves exercise tolerance. The technique should be considered in patients with neuropathic pain who do not respond to conventional treatment.

OBJECTIVE: Painful diabetic peripheral neuropathy (PDPN) is a common complication of diabetes mellitus. Unfortunately, pharmacological treatment is often partially effective or accompanied by unacceptable side effects, and new treatments are urgently needed. Small observational studies suggested that spinal cord stimulation (SCS) may have positive effects. RESEARCH DESIGN AND METHODS: We performed a multicenter randomized clinical trial in 36 PDPN patients with severe lower limb pain not responding to conventional therapy. Twenty-two patients were randomly assigned to SCS in combination with the best medical treatment (BMT) (SCS group) and 14 to BMT only (BMT group). The SCS system was implanted only if trial stimulation was successful. Treatment success was defined as >/=50% pain relief during daytime or nighttime or “(very) much improved” for pain and sleep on the patient global impression of change (PGIC) scale at 6 months. RESULTS: Trial stimulation was successful in 77% of the SCS patients. Treatment success was observed in 59% of the SCS and in 7% of the BMT patients (P < 0.01). Pain relief during daytime and during nighttime was reported by 41 and 36% in the SCS group and 0 and 7% in the BMT group, respectively (P < 0.05). Pain and sleep were “(very) much improved” in 55 and 36% in the SCS group, whereas no changes were seen in the BMT group, respectively (P < 0.001 and P < 0.05). One SCS patient died because of a subdural hematoma. CONCLUSIONS: Treatment success was shown in 59% of patients with PDPN who were treated with SCS over a 6-month period, although this treatment is not without risks.