A spinal cord stimulator, also called a dorsal column stimulator, is an implanted electronic device used to help treat chronic pain. They have been used for over 30 years. The device delivers a low level electrical current through wires. The wires are placed in the area near your spinal cord. The device is similar in size to a pacemaker.

The spinal cord stimulator will not cure your pain. A 50 percent or greater decrease in pain can be expected, however. This should allow you to be more active. Also, need for less pain medication is considered a successful result. A trial with an external device for about a week is done, before having the device implanted.

What parts of the spine are involved?

The spine is made up of 24 bones called vertebrae that stack on top of one another. In between the vertebrae are intervertebral disc. The vertebrae have bony projections that form a roof that encases and protects the spinal cord. The spinal cord is a hollow tube of nerve cells that have motor and sensory pathways to the brain and to the body. 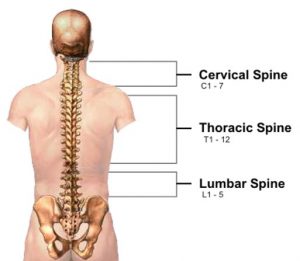 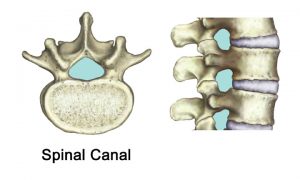 The spinal cord and brain are bathed by cerebral spinal fluid. The fluid cushions and protects the fragile nerve tissue.

Discs help cushion the spine. They also allow space for nerve roots to exit the spinal cord between two vertebrae. These spaces or openings for the nerve roots are called neuroforamen. If there is not enough room for the nerve roots, it can cause nerve pain such as burning, pins and needles, and hypersensitivity. Pain from a pinched nerve follows a pattern called a dermatone Pinching of the nerve can also cause decreased motor strength that can be a cause for surgery.

What does my surgeon hope to achieve?

The spinal cord stimulator will not cure your pain. However, a 50 percent or greater decrease in pain can be expected. This should allow you to be more active. Also, decreased need for pain medications is considered a successful result.

Spinal cord stimulation is usually considered when surgery, injections, physical therapy, medications, and other treatments have failed to give enough relief of pain. The pain is considered chronic and severe.

Spinal cord stimulation has been approved by the Food and Drug Administration for the treatment of chronic intractable pain in the trunk and limbs. It seems to work best for neuropathic pain. This is pain caused by injury or disease to nerves. It has also been used when there is continued pain, especially into the leg(s) following back surgery. This condition is called Failed Back Syndrome. It seems to be less helpful for back pain without pain into the legs. It has also been used for a condition called chronic regional pain syndrome.

Before having the device implanted, you will be required to undergo a physical examination. This may include a psychological evaluation. You will also have to undergo a trial with an external spinal cord stimulation device. The trial determines whether or not your pain rating, medication dosages, and activity level are improved. You will be considered for the implanted device only if the trial is successful.

There are several conditions that would not allow you to be considered for the spinal cord stimulator. These include but are not limited to the following

How should I prepare for surgery?

The surgery usually takes place in a Same Day Surgery facility. An operating room is considered sterile and decreases the risk of infection. The procedure may last up to three hours. You should be able to go home the same day.

Before either the trial or the surgery for implanting a spinal cord stimulator, your surgeon will discuss the preoperative guidelines. Follow your surgeon’s instructions. These instructions may include

What happens during the surgery?

A surgeon, anesthesiologist, or other doctor who specializes in the treatment of pain does the implanting of the spinal cord stimulator.

The procedure is done in two stages. First is the trial stimulation. Second is the placement of the permanent device. Most of the time, a general anesthetic is not used. Especially during the procedure for the trial, you must be awake. You will need to help guide your doctor when adjusting the device in order to provide the best pain relief. You will be given an intravenous sedative to help you relax. Local numbing medication will also be used.

Placement of temporary wires for the trial is considered a minimally invasive procedure. An epidural needle is placed near the spinal cord. This is done with the help of a special X-ray called fluoroscopy. The electrode wires are then inserted through the needle. The wires are attached to an external stimulator. Your surgeon will adjust the wires and the stimulator. When satisfied with the placement of the wires, a stitch to your skin is used to keep the electrode wires in place for the trial period. You are able to adjust the strength of the electrical stimulation from the external device. You are able to turn it off and on. You should feel a tingling sensation that covers the area of your pain. The trial usually lasts about seven days. 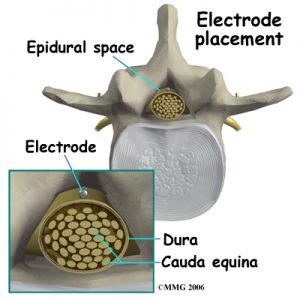 Usually this is done through the skin with a needle just like the trial. Sometimes a small piece of bone on the vertebrae must be removed. The wires are then run under the skin and attached to the implanted spinal cord stimulator device. 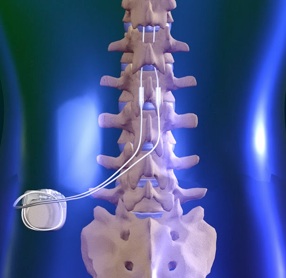 Some devices are battery powered others have a radiofrequency receiver. The receiver is powered by an externally worn power source. The devices can be programmed to adjust the type and strength of the electric stimulation. The spinal cord stimulator is not necessarily permanent. It may be removed if necessary. In fact, the battery-powered device may last only two to five years. It cannot be recharged. The device must be removed surgically and replaced with another.

Infection can occur at the incision, around the spinal cord, or the vertebra (bone).

Increased localized pain should be expected for one to two weeks following the surgery.

Bleeding into the spinal canal can cause squeezing of the spinal cord. This can cause paralysis or loss of movement of the limbs. Loss of bowel and bladder function can also occur. This would require an emergency surgery. The spinal cord damage can be permanent. Bleeding is more common in patients taking blood thinners or who have a genetic problem with clotting.

Pneumothorax is the collapse of a lung. A lung can be punctured when needles are inserted in the area of the chest or upper back.

Spinal fluid leaks out of the epidural space can cause a persistent headache. This is caused by leaking of the cerebral spinal fluid around the electrode wire site. Lie flat and drink plenty of caffeinated non-carbonated fluids. If your headache lasts longer than 48 hours, call your surgeon. A spinal fluid leak may require surgery to correct.

Nerve damage caused by needles and electrodes placed in the area of the spinal cord may occur. Even paralysis that could be permanent could occur.

Allergic reactions can occur, usually to medications or dye used during the surgery. Anaphylactic reaction can be deadly.

A worsening of symptoms can be a result of surgery.

Seroma is the collection of fluid around a surgery site. One can develop in the pocket around the implanted device. It can last several weeks or months. It can be drained by your surgeon. It can become infected. If this occurs the device must be removed.

Technical problems or failure of the device can occur. Movement or disconnection of the electrode wires makes the device ineffective.

What happens after surgery

You will need to lie down as much as possible for 12 hours following your surgery.

Your surgeon will allow pain medication for the first few days following surgery. Narcotic medications can cause constipation. Laxatives may be necessary to have regular bowel movements. You may be asked to avoid the use of an anti-inflammatory such as aspirin, ibuprofen, (Motrin), napoxyn (Aleve) as they can cause bleeding.

You will be asked to avoid bending, twisting, stretching, reaching overhead, or lifting objects over five pounds for the first six to eight weeks. This is to avoid movement of the catheter. You will not be able to drive for two to four weeks after the procedure. Sexual activity may also be restricted initially.

You should expect some mild swelling and bruising at the incision site. Ice packs may help with pain and swelling. There will be sutures or staples and a dressing covering the incision. Call your doctor immediately if you run a temperature, or notice redness, swelling, separation, or drainage from the incision.

You will be allowed to shower but not bathe or submerge your incisions for 4 weeks. Watch for visible swelling or leaking of fluid from the incisions. You should wear loose clothing over the incision sites.

If you should have sudden weakness of your legs, loss of bowel or bladder function, or sudden severe back pain, you should call your surgeon and go to the emergency department. It may indicate pressure on the spinal cord, a complication that could require emergency surgery.

You will be given instructions on how to operate your spinal cord stimulator. You will also be given an identification card for the device.

Usually one or two hours of stimulation, three to four times a day is enough to relieve pain for the rest of the day. You should expect 50 to 70 percent improvement in your pain.
The device should be turned off when driving and operating machinery or power tools.

You will have a follow up appointment with your doctor seven to 10 days after surgery to remove sutures or staples. Your surgeon may make adjustments to the device at this and other follow-up appointments.

What should I expect during my rehabilitation?

Walking is encouraged following the procedure. Start with a short distance and gradually increase to one to two miles per day.

After six to eight weeks, you should be able to resume and eventually increase your activity level.

Electronic systems that contain magnets will need to be avoided. They can interfere with the electrical current from your device. These include security systems found in libraries and airports. Strong X-rays, ultrasound, and magnetic resonance imaging (MRI) should also be avoided. The identification card is used to show airport and other security officials when necessary. The ID card can also be used in the event of a medical emergency. It is important for medical providers to know about the implanted device.

Microwaves, cell phones, pagers, and anti-theft sensors will not affect your stimulator.

Kenneth Snyder injured his back in 1998 and was in severe pain. After years of powerful pain medication, he needed an alternative treatment. Dr. Hanna Suggested an innovative procedure – A spinal cord stimulator. After having the device implanted, Kenneth is no longer in pain and has his life back!